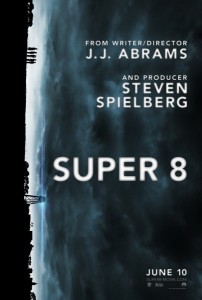 What a wild ride! I went and saw the movie Super 8 last night, and I must say, I was super impressed (pardon the pun! :D). The movie is set in the late 1970’s and deals with a group of kids set on making a monster movie in the Super 8 format (for all you whippersnappers like me, that’s an old movie format that needed to be viewed on a projector after it was developed, as in you couldn’t watch it right away!!). It was directed by the powerhouse that is J.J. Abrams and Steven Spielberg, and it shows, from the makeup and ambiance to the special effects and CGI. I absolutely loved it! Read more for my complete review!

The plot is entirely original (to a point) and the acting was SUPERB! I was literally on pins and needles most of the time. There is plenty of Sci Fi action and violence, so its not good for the kiddos. But otherwise, it was a trip! It really took you back in time to the 70’s!

The plot deals with a small town that makes a living off the Steel mill. You are introduced to the main character through the death of his mother, who was involved in an accident in the mill. You slowly began to meet all of the characters after that. The characters were well casted, and very believable. As you get to know the characters, you see that they are involved in making a movie for a competition, and are shooting it when they accidentally film a train wreck, and what emerges from the train wreckage is more than they can ever imagine. The movie is very interesting and I highly recommend it 🙂