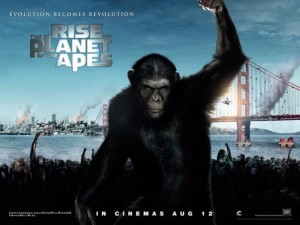 Lets begin with the acting, which was superb. I normally do not like James Franco, as he seems to be somewhat ditzy in some of his other movies. In this movie, he is portrayed as a scientist who is desperately trying to save his father from Alzheimers. He acting is great, and really makes the movie the success that it is. At least, until Cesar. The true main character of the movie, Cesar is a monkey that has been blessed with extreme intelligence due to the virus that his mother was injected with. I believe that he is completely CGI (Computer generated imagery), but they do an AMAZING job of getting us to care about him. His acting is amazing, for a chimp, and he was brilliant!

The graphics in the movie were so amazing, you didn’t even see it, which is pretty amazing considering the entire movie is about a genius monkey who is animated throughout the movie. You are completely immersed, which lets you enjoy the story line.

What I really enjoyed about the movie was the fact that it plugged up many of my questions from the original movies, and really integrated the old with the new. I must admit though, that I felt dated, when one of the characters yelled out “Let go of me you D***** dirty ape” and I was the only one in the theater to bust out laughing. Goes to show that the current generation is missing out on some great movies! Also, Charlton Heston makes a cameo appearance, which was very surprising considering that he passed away in 2008! (the way they did it was awesome, but once again, nobody in the theater understood why it was awesome to see him again!).

Anyway, overall, I absolutely loved the movie, and it is mostly family friendly except for maybe a bit of violence and a part where Cesar bites off someones finger (they barely show anything, except for some blood). Other than that, if you are a fan of the original movies (they made 5 of them!!!! Can you believe that??) then you will LOVE this movie, and even if you aren’t a fan of the original movies, you will still love it! It has plenty of drama, action, and more primates than you can shake a stick at! Go check it out, you wont be sorry that you did!