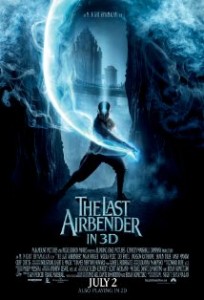 Ok, I must admit, I haven’t really kept up with Anime as much as I would like to. Personally I love anime, and think that it is a wonderful art form. Obviously, its not very realistic, but that is ok with me. What I am not sure of is the conversion of this anime to a movie. You might or might not know that this movie is actually based on an anime series from Japan. It focuses around a world in which people have powers related to the nature. Each nation (Air, Water, Fire, Earth) has “Benders” which can control these elements. Unfortunately, Fire Nation has gotten too big for its britches and is trying to get rid of all “Benders” and take over the world. To that End it destroyed all the Air Benders, except the most important one. The one called the Avatar. He threw a tantrum 100 years ago and ran away, but got caught in a storm, and was flash frozen, only to awake 100 years later. The Avatar is special because he has control over all 4 elements. Unfortunately since the Avatar threw a fit and left before he could be trained, he can only control wind. The movie starts with a title saying Book 1 I believe, insinuating that there will be more. This is good and bad. I think its good because this movie will leave you hanging as it is part of a quartet, bad because I don’t know if the movie is good enough to make 3 more. Personally I liked the movie. I enjoy the mystical Mumbo Jumbo, and I love the effects in the movie. The only problem I had with this is that it has been REALLY compressed. We’re talking a seasons worth of anime tv series compressed into one movie. It leaves you with a lot of questions, and many parts seem hurried. This was not good for the flow of the movie.

This is a Family friendly movie in my opinion. Yes, it has a lot of battles and fighting, but none of it is gory, and the only real killing is near the end and is bloodless. There is a part with a lot of skeletons that might be a little much for the squeamish and particularly small children.