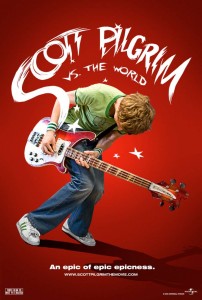 “You must defeat my seven evil exes!” Scott Pilgrim is probably my new favorite movie. It has just about everything I could ask in a movie. Romance, Action, Subtle Video Game References, and did I mention action? This movie is more in the vein of film noir, but for video games or comic books. Although they were shooting for video game scenes, I think it came across more as a comic book. Either way it was extremely enjoyable. A am not normally a fan of Micheal Cera. I find him to be just a little bit dull, and somewhat stupid, but I have to say that his acting was pretty good. I still dont really like him, but he did well as the nerdy bass playing band nerd. It was definitely a movie for nerds, and most others might not like it. My wife for example thought it was quite stupid. Most of it was somewhat easy to guess, I will admit, but for me, this movie was more about the journey, than it was about the story. The premise is that the boy, Scott, meets and falls in love with Ramona Flowers, and must defeat the league of evil exes. The movie to me is more of a metaphor of dealing with one’s baggage, and that even though you might leave people behind, in your journey for true love, they are still going to be part of your life, whether you want that or not. Many scenes are very random, like at the beginning, during the battle of the bands, and actual battle takes place between Scott and first of Ramona’s exes. Everyone seems to take this in stride, like its not a huge deal. That is why I say, dont come expecting a normal movie. Enjoy the trip, and make your decisions on the movie, not on the actual believability, but on the acting and message that the movie has.

This movie isn’t very family friendly, so I wouldn’t recommend it to everyone. In the end, it’s up to you whether or not you like it, but I say give it chance, and it might grow on you!