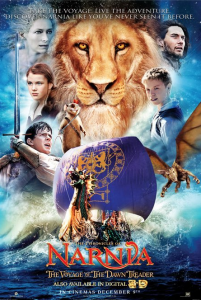 There aren’t many movies that make me feel nostalgic, but Narnia movies definitely do. When I was younger, my parents gave me the BBC movies from television of the The lion, the Witch and the Wardrobe. Me and my siblings later watched all of them, but our love for the series escalated like never before. We read the books, and learned the mythology behind it. It is one of my happiest memories from my childhood. The new movies are definitely alive with the magic of the originals, and the books.Watching the new Narnia movie, I was immediately sucked in, and felt right at home with the characters. They were very believable, and very likable. I even liked Eustace, the brat. It is full of action, and adventure, but also with moral cautions, and spiritual overtones. The special effects were wonderful, and very realistic, but I did have one complaint. The 3D was HORRIBLE! I found myself pushing the glasses up because the glasses dim the light from the screen a lot, and the 3D was very minimal. Most movies make an effort and have 2 or 3 moments that are just in the movie to showcase the 3D, but not this movie. Sure the waves of the ocean seemed real, and there were moments when it was nice, but if I had known it would be that bad, I wouldn’t have bothered.

I found the voyage of the dawn treader to have many moments of instilling deep morals, but near the end of the movie, a giant monster appears that destroys any benefit a very young child would get from the dialogue. If the little one is under 8, you might want to refrain from taking them. Of course with all the monsters kids see on TV nowadays, this one is nothing compared to those.